One of Florida’s notorious and plentiful green invasive iguanas wreaked chaos earlier this week in one city after scuttling into an electricity substation in Lake Worth Beach and somehow causing a huge power cut.

The authorities announced a “large scale outage” on Wednesday after an iguana “came into contact” with a transformer at the station.

The power fried, and so did the lizard.

“[Lake Worth Beach] Electric Utility is currently responding to a large scale outage caused by an iguana at our 6th Ave Substation,” the city tweeted just before noon on Wednesday.

“This outage is effecting customers in the South East area of our service territory. Our teams are working hard to repair the damage and restore the system.”

LWB Electric Utility is currently responding to a large scale outage caused by an iguana at our 6th Ave Substation. This outage is effecting customers in the South East area of our service territory. Our teams are working hard to repair the damage and restore the system. 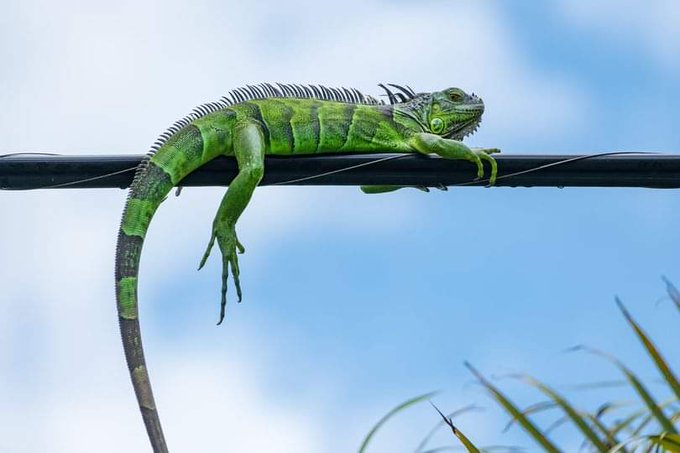 The power was restored not long afterwards but one woman commenting on the city’s Facebook post said the iguana in her neighborhood “went up under the transformer or something but he blew it and he fried”.

The Florida fish and wildlife conservation commission considers the iguana invasive – they are native to Central America and parts of South America and some Caribbean islands.

But they are omnipresent in south Florida and can grow to more than 5ft long.

The reptiles are notorious for disrupting traffic and digging under structures – and for dropping, catatonic, out of trees in cold weather. They are also good swimmers, have a big appetite and are also appetizing to humans who have a taste for their meat.

Cities such as Miami Beach that once saw little to no non-native reptile activity have been overwhelmed by the proliferation of the large, spiny lizards that damage buildings by digging burrows underneath, devastate plants and landscaping, and defecate at will. The authorities are trying various ways to dent their numbers.

Meanwhile, in Lake Worth Beach, a city spokesman, Ben Kerr, told local TV that iguanas have a tendency to get into electricity substations and cause damage.

While extra precautions have been taken, he said: “They are so big they basically straddle the [power] lines” and shimmy into places where they don’t belong.

In this case, the iguana’s zapped remains were removed by workers and with a bit of repair work the city’s lights came back on.
–