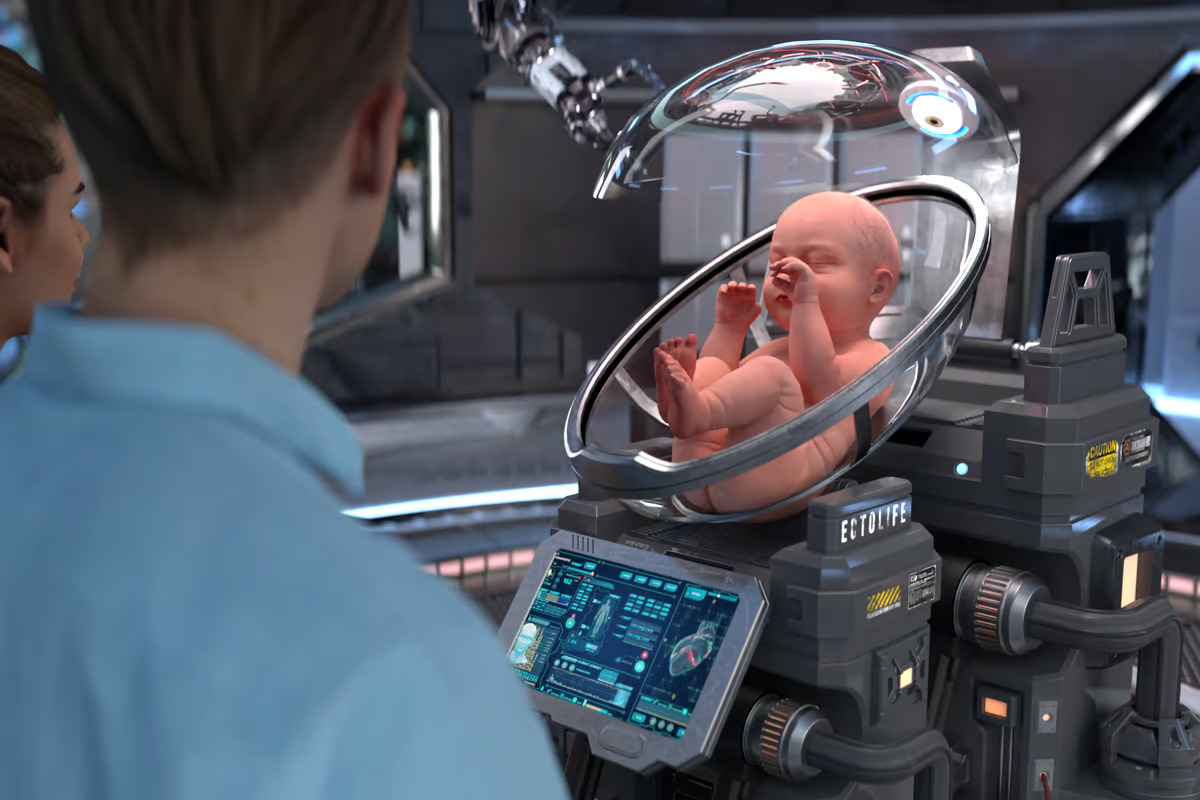 By Loz Blain
2022 Dec 12
–
The EctoLife Artificial Womb Facility envisages a controversial new way to be pregnant, with the baby growing in an idealized, but completely inhuman environment: transparent “growth pods” arranged by their hundreds in human baby farming operations.

To be clear from the outset: this is just a concept at this stage, the brainchild of Berlin-based “producer, filmmaker and science communicator” Hashem Al-Ghaili. There are no immediate plans to build an EctoLife facility, this is merely a piece of science fiction Al-Ghaili has extrapolated from the current state of fertility research.

It’s designed to start a conversation and make an argument for a new model of parenthood that Al-Ghaili believes will be possible within years, and widespread within decades.

Al-Ghaili’s argument goes something like this: pregnancy is not fun. It can be exhausting, painful, nauseating, intrusive, inconvenient and sometimes flat-out dangerous for a mother, and there are all kinds of ways it can be suboptimal for a baby. If you’re pregnant and you smoke, or party, or stress too much, or catch certain diseases, or you simply don’t play enough Mozart at your burgeoning belly, you might not be giving your child the best start you can.

The science isn’t far off, says Al-Ghaili, from being able to replicate the ideal gestation conditions in a temperature-controlled, infection-free womb with a view. An artificial umbilical cord can provide oxygen and nutrition as the tot floats in artificial amniotic fluid, continually refreshed with precisely tailored hormones, antibodies and growth factors. Baby waste products can be removed, run through a bioreactor and enzymatically converted back into “a steady and sustainable supply of fresh nutrients.” Yummo.

Little speakers can make sure the tyke is getting the best possible brain nutrition, too. We’re talking all the classical music it can handle (which may be more than the parents can handle), as well as your own soothing voice piped in as well, to start building that invaluable bond.

Vital signs will constantly be monitored – as, rather forebodingly, will physical defects and genetic abnormalities. Real-time data on your little Tamagotchi will pop up through a phone app, along with a live HD fetus cam and the ability to scroll through time-lapse videos of your child’s development from embryo to nine months…

…And potentially, beyond. Human babies are among the most helpless and underdeveloped in the animal kingdom. Why can’t we pop out of the womb and take our wobbly first steps five minutes later, like a calf does? It’s because our brains are too big for the human female hip gap; we’re born undercooked, with soft, pliable skulls, several months behind other animals developmentally. But in an EctoLife EZ-Womb, there’s no such biological limit. You could experiment with much longer gestational periods, the results might be terrific.

If this all sounds a little impersonal, cold and disconnected to you, Al-Ghaili has more technology to soothe your mind. Think you might miss the feeling of the baby kicking? Boom. A haptic suit can bring that sensation back for any parent that wants it, and only when they want it. Want to see the beginning of life from your kid’s point of view? Whack on a VR headset and tune in to a 360-degree camera any time you like.

What’s more, if you don’t dig the idea of your precious bundle of joy being grown in a 400-pod baby lab, at a baby farm boasting 75 of those labs and pumping out 30,000 babies a year, you can have a battery-powered pod installed in your own home. Heck, keep it there post-birth to get some little brothers and sisters happening.

You might not have the same intensely human birthing suite experience as the billions of parents before you, but on the other hand, you’ll arrive at your first day on the tough job of parenthood feeling physically fresh and well-rested, instead of having been gradually weighed down and latched onto by a parasitic organism that tends to leave rather a path of destruction upon its exit even in the best case scenario. Given the option, I’m sure some mums would choose to push a button and watch a little pod open up.

It’ll start out, Al-Ghaili feels, as the only option for certain parents: those who can’t conceive or bear kids naturally. But as it’s refined and proven, it’ll become an option for all prospective parents, linking in easily with the IVF, genetic screening, embryo selection, genetic potential modelling and genetic engineering we know is coming rapidly down the chute.

Once it’s well-developed and available, it might start looking like a pretty attractive option for folk that like the idea of a baby but can’t see why they should have to go through the ordeals of pregnancy and childbirth to get one. Heck, you might not even need a day off work, just hold hands with your significant other after a day at the office, head down to the baby farm and pop the lid on life as a parent. EctoLife will even hook you up with a free genetic test to make sure you’re not heading home with the wrong kid.

That’s the argument, in a nutshell, for growing your kids in an artificial nutshell. You can explore it in more detail in the extraordinary video below. I’m not gonna lie, I find this concept pretty twisted, inhuman and dystopian. But given the Matrix-reminiscent layout of the EctoLife facility and a certain Paul Verhoeven-esque quality in the narration, one gets the impression Al-Ghalil wants to provoke strong reactions.

And at the end of the day, if I search my heart, I’ve got two kids that I feel very connected with and close to, and I didn’t have to go through pregnancy or labor; I left that bit to my wife. So I’m hardly in a position to criticize the idea. We’d be fascinated to hear your thoughts in the comments below.

37 comments
Sign in to post a comment.
Please keep comments to less than 150 words. No abusive material or spam will be published.
WONKY KLERKY – 2022 Dec 12 – 01:37 AM
Oh Brave New World ! ! ! ! ! !
martinwinlow – 2022 Dec 12 – 02:17 AM
Ah! Just in time for the West’s incipient population crash…
EUbrainwashing – 2022 Dec 12 – 03:08 AM
The fact is that building humans that behave like robots is far more probable than building robots that can think like humans. Biobots if you like!
Andrew Hall – 2022 Dec 12 – 03:10 AM
It’d be interesting to see how long, with this kind of capability, evolution would take to fully deprecate our ability to give birth naturally. Of course, this is probably already happening anyway, but you’d have to imagine this would accelerate it.
Brian M – 2022 Dec 12 – 03:21 AM
Some might say its unnatural, but species evolve in different ways,
Homo sapiens have placed their evolutionary trajectory towards the ability to learn, think and invent like no other creature on the (this) planet.
Evolution has had to compromise on the anatomy on how we do this, leaving youngsters totally helpless for a long period of time compared to other animals, not to mention the risk to the mother. So given the somewhat unique capabilities of our species its perhaps not surprising that we would try to eliminate the downside of our evolution.
Perhaps even more excitingly, such technology might be used in preserving species at risk of going extinct or transporting other animals as a compact embryo across space for final development on a different planet.
Chris – 2022 Dec 12 – 04:13 AM
As if we need to increase the human population! I wonder how much more disconnected children could become through these labs? Social media isolation would start from day one! A race of androids who will be perfect for brainwashing.
Sergius – 2022 Dec 12 – 04:39 AM
On the way to androgyny…
Sergius December 12, 2022 04:43 AM
The farther from nature, the closer to self-annihilation…
Cymon Curcumin – 2022 Dec 12 – 06:56 AM
Since the largest problem causing declining fertility rates has nothing to do with infertility or lack of desire or ability to carry a child but the lack of time energy and money to raise them, this won’t solve much in regards to population replenishment.
michael_dowling – 2022 Dec 12 – 07:20 AM
People who are allegedly abducted by UFOs report pods growing human/alien hybrids on the ship.
José Fermín – 2022 Dec 12 – 08:12 AM
Oh, yes, the future looks bright when we call a baby a “parasityc organism” and we expect parents who cant even be bother to deal with pregnancy to nurture a child for 18 years. These guys are real geniuses
guzmanchinky – 2022 Dec 12 – 08:36 AM
My poor wife. Lost some vision in one eye due to a burst artery from pushing. She herself says she would have rather used something like this. The women should decide. Men have no place deciding on this at all…
Inga – 2022 Dec 12 – 08:50 AM
It really doesn’t get more dystopian than this. How horrifying.
Load More
–