Native American chefs are redefining the food truck scene while building a loyal customer base. 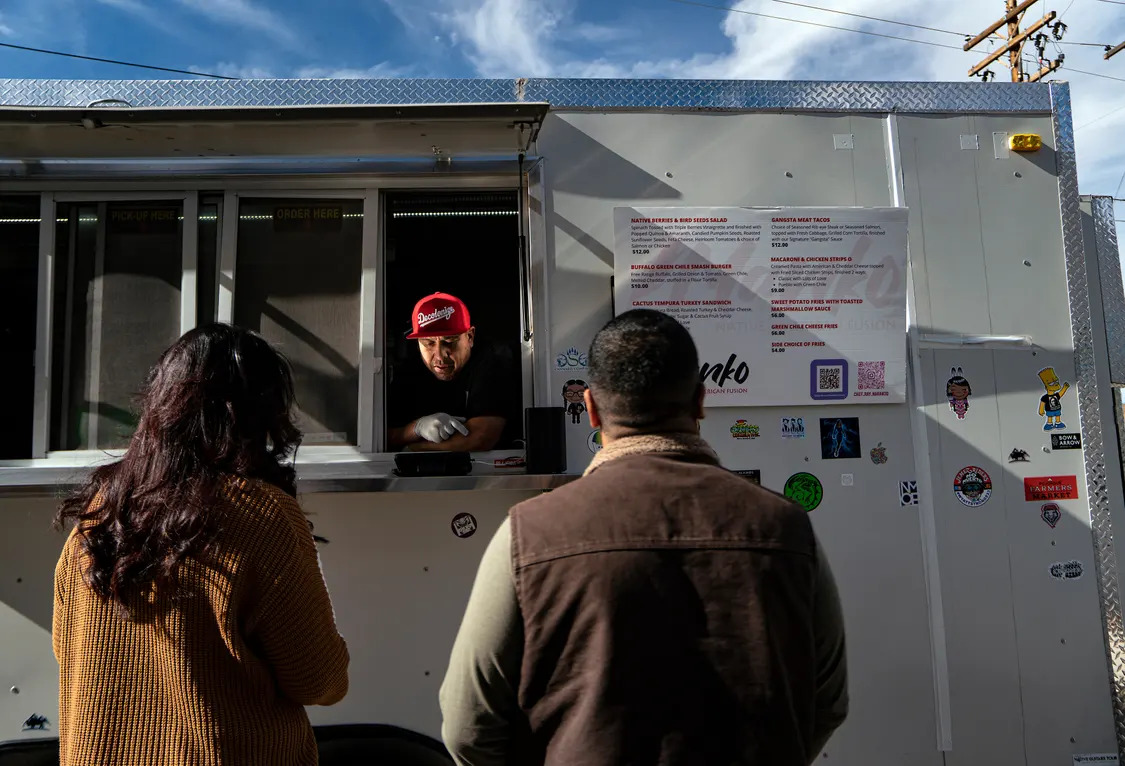 By Cecilia Nowell
Last modified on 2022 Dec 27
–
The line outside a beige, sticker-covered food truck grows longer as participants in Albuquerque, New Mexico’s annual Prickly Pear festival break for lunch. As they wait in line, attenders try to decide between a turkey sandwich with cactus fruit syrup, a salad layered with popped quinoa and amaranth grains and a host of other options. The food truck is Manko, and its chef, Ray Naranjo, is one of many Native American chefs redefining the food truck scene in the southwest.

While Native American-owned restaurants like Owamni and Wahpepah’s Kitchen have recently garnered national attention, Native-owned food trucks are forging their own path – traveling the dusty highways and backroads of New Mexico to bring Indigenous recipes to customers.

New Mexico has the third largest Native American population in the US. But few of the state’s restaurants are actually Native-owned. As a result of the Covid-19 pandemic and its impact on the restaurant industry, Native chefs are increasingly turning to food trucks to launch their own businesses.

Many of these food trucks were created to provide “four-star dining experiences” for places that may not otherwise have access to them, says Dr Ariel D Smith, founder and host of The Food Truck Scholar podcast.

Smith says many people of color – who have been marginalized from wealth over generations – choose to open food trucks because they are more affordable than a restaurant. Because of this, there is something uniquely powerful about watching a food truck’s journey, she adds. It gives customers “a feeling of investment and participation”.

Here are three food trucks – launched by chefs from the northern pueblos of New Mexico – that are crisscrossing the state, building a loyal customer base.

In 2013, while he was studying for a business degree in Española, just a few miles from his home pueblo of Santa Clara, Ray Naranjo joined the Pueblo Food Experience.

Founded by Santa Clara sculptor and seed saver Roxanne Swentzell, the project asked 14 volunteers of Pueblo descent to spend three months eating only the foods available to their ancestors before European contact. Although Naranjo – who’s Santa Clara and Odawa – had spent more than a decade working as a chef, primarily in Native-run casino kitchens, the experience reframed his relationship with Native food.

When he started his next job at El Monte Sagrado in Taos, Naranjo said he started getting noticed for “introducing Indigenous ingredients into fine dining”. He brought that commitment to his next few roles at Angel Fire Resort and the Indian Pueblo Cultural Center in Albuquerque until he opened his own food truck, Manko, earlier this year.

Naranjo serves typical food truck comfort foods, but with a Native American twist. Rather than serving a plain burger, they’ve got a buffalo green chile smash burger; instead of a regular turkey sandwich, a cactus tempura turkey sandwich. Eventually, Naranjo hopes to see Manko transformed into a brick-and-mortar cafe. The food truck is a helpful bridge. “It allows you to do all your market studies, truly test your ingredients and your menu items against high volume,” he says.

Manko takes its name from the Tewa word for “come and eat”, and the focus on fusion is key to Naranjo’s goals as a chef. Although he’s committed to using Indigenous ingredients – “what isn’t affected by Native ingredients?” he asks, referencing the corn, tomatoes and potatoes central to much modern cooking – European, Asian and African influences are also in his recipes.

“I don’t feel like we should go back [to entirely pre-contact cooking], even if you try to go back you’re lying.” Naranjo says he explores the ways Native foods have wound their way into dishes from around the world, and in turn experiments with how those global flavors can create a new Native American fusion.

When Ryan Rainbird Taylor started cooking specialty meals for delivery during the first months of the Covid-19 pandemic – after his employer, the Four Seasons in Santa Fe, had furloughed much of its kitchen staff – he knew immediately who he wanted to name his venture after.

In 1680, a man named Popay – who, like Taylor, hailed from Ohkay Owingeh pueblo – led the pueblos of modern-day New Mexico in a rebellion against Spanish colonizers, today known as the Pueblo Revolt. Mashing up the words “pop-up” and “Popay” spelled backwards, Taylor officially launched Yapopup, a traveling kitchen focused on Indigenous soul food.

Naranjo was key to starting the project, said Taylor. “Chef Ray is definitely my biggest influence, my biggest teacher,” he said. “We’re not related, we don’t have any family connection, but he’s never given up on me.”

With collaborators Gabe Borrego, Josh Phillips and Alejandrino Medina, Taylor started looking for comfort food recipes from around the world that they could put a pueblo spin on. One of their biggest hits are pueblo birria tacos. Borrowing the tortilla shell and Oaxaca cheese that make quesabirria tacos popular in much of México, Taylor replaced the birria filling and Coahuila chile with his grandmother’s feast stew and New Mexico-grown red chile.

Taylor quickly found that Yapopup could “bring people in that aren’t used to trying out pueblo food” by experimenting with comfort foods they may already like while also allowing people who “are stuck on the Rez” to “try out different food that they would never try if it didn’t have the pueblo familiarity”.

The logo he settled on to represent Yapopup – a green alien designed to look like a Kachina doll – has a similar meaning. “I want to be a transcendent brand. I want to be something that’s not of this Earth, but I also want to have those ties back to my pueblo,” said Taylor. Since Yapopup launched, Taylor has been touring the country and cooking with other Native chefs from New York to San Francisco, hoping to build anticipation for the formal opening of the Yapopup food truck next year.

Over the Moon: Family-made frybread

When Min Arquero was a kid growing up in Cochiti Pueblo, she and her mother had a tradition of selling frybread on the side of the road together. They would set up a tent and table along a popular thoroughfare and fry up the dough they had prepared at home for any passerby craving the familiar taste.

“I learned everything from my mom,” said Arquero. Not just about cooking, but life. She and her mother always dreamed that they’d make it big someday and move their roadside setup into a food truck. But in 2003, Arquero’s mother died of breast cancer. After that, their dream to open a food truck became Arquero’s way of preserving her mother’s memory.

In 2020, just before the Covid-19 pandemic began, that goal became a reality. Arquero opened the Over the Moon food truck and began serving Indian Tacos (frybread topped with beans, ground beef, lettuce, tomatoes, cheddar cheese and green chile) as well as Frito Pies. The food truck took its name from the nickname “moon” that Arquero’s cousin had given her as a child.

Although the truck got off to a slow start, pausing operations during the worst of the pandemic, Arquero says business is picking up again. They’ve popped up at local markets, like Sandia Pueblo’s Bien Mur, holiday celebrations and school events across New Mexico.

Frybread has a complicated history in Native communities: it was first made by Navajo families when they were forcibly relocated from their traditional lands to Fort Sumner, during a 300-mile journey known as the “Long Walk”, when many only had access to the flour, sugar, salt and lard given to them by the US military.

Despite that painful past, it has persevered, and even woven its way into traditions. Arquero says frybread is central to certain meals and events in Cochiti. From her mom, she learned to put special care into preparing it. “Pretty much everything is handmade,” she says of Over the Moon’s menu. Until recently buying an industrial mixer, she was preparing 50 to 75 pounds of dough for each event by hand.

Wooden spoons and glass mugs: how to avoid toxic chemicals in your kitchen

The US struggle to pay for food: ‘No matter how well you budget, you will run out of something’