An artist’s impression of the inner structure of the Earth.  Depositphotos
–

With thousands of miles of rock in the way, it’s hard to get a good look at exactly what’s going on in the center of the Earth. Scientists have to study it indirectly by measuring magnetic field changes, ancient crystals, or how seismic waves from earthquakes propagate through different layers. This has helped geologists learn new details, including that the core could be made of a superionic iron alloy.

Now a new study has reached a surprising conclusion – that relative to Earth’s surface, the inner core stopped spinning around 2009. This could be possible because the inner core is a more or less solid ball of iron floating in a liquid outer core, so its rotation is not necessarily tied to that of the rest of the planet.

The researchers, from Peking University, analyzed the seismic waves from earthquakes passing through the inner core since the 1960s, investigating the differences in how those waves looked and how long it took them to propagate. Intriguingly, they found that for decades the travel times of these waves would vary in specific ways – but after about 2009, that variation all but vanished. Travel times have remained steady, which the team says is an indication that the core’s rotation has “paused.”

That doesn’t mean that it’s not spinning at all – it means that the core’s rotation is now essentially in lockstep with the rotation at the surface. At different times the core can race around or lag behind the surface, but even then the difference is tiny. It can, however, add up over time, so that the core is drifting by dozens of kilometers per year.

The team goes a step further and says that the study could indicate that the core may now be rotating in the opposite direction. But again, that doesn’t quite mean what it sounds like – instead, the core’s slowing rotation makes it appear to be drifting backwards relative to the surface.

If you saw this headline, or one like it, you might reasonably have thought the world has gone mad. The inside of the Earth is spinning backwards? *But that is not at all what the actual research says.* [a short thread] #RealityCheck 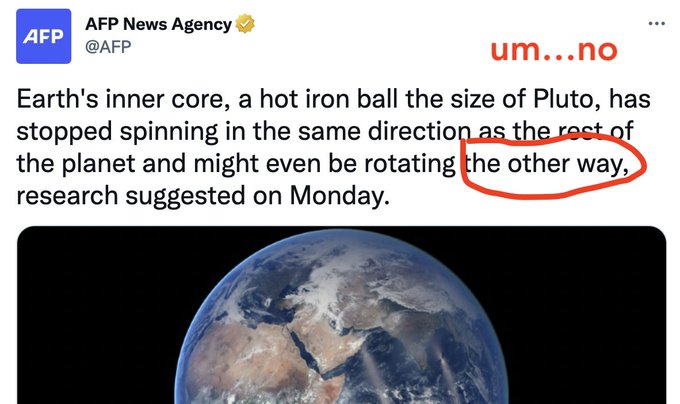 Read the full conversation on Twitter
1.5K
Reply
Copy link
–
This is all part of a 70-year cycle, according to the researchers. They claim to have found evidence that the previous reversal took place in the early 1970s, and it may even coincide with other observed changes in Earth cycles, such as the magnetic field and the length of the day.

The cause of this cycle could be several major competing forces. The magnetic field generated by the outer core could be speeding up the inner core’s spin, while the huge gravitational influence of the mantle could drag on it and slow its spin.

Of course, in the murky world of inner Earth geology, nothing is set in stone (pun intended), and other scientists disagree with the findings of the new study.

“These mathematical models are most likely all incorrect because they explain the observed data but are not required by the data,” Hrvoje Tkalcic, a geophysicist at the Australian National University, told AFP. “Therefore, the geophysical community will be divided about this finding and the topic will remain controversial.”

The new study was published in the journal Nature Geoscience.

Michael Irving
Michael has always been fascinated by space, technology, dinosaurs, and the weirder mysteries of the universe. With a Bachelor of Arts in Professional Writing and several years experience under his belt, he joined New Atlas as a staff writer in 2016.
–
4 comments
Sign in to post a comment.
Please keep comments to less than 150 words. No abusive material or spam will be published.
Ranscapture – 2023 Jan 25 – 12:17 AM

What are the implications of the induced motion on the core (and therefore the Earth) due to conservation of angular velocity effects of that?

I wonder if this behaviour in the core causes the Earth to wobble or the axis to shift, that is something I have wondered about over many years.

Some scientists and Suspicious 0bservers are saying we are due for a polar reversal this century. I tend to agree with them and Doug Vogt.
–